Adonis Creed, after winning the World Bodyweight Championship, is challenged to a boxing match by Viktor Drago, the son of Ivan Drago, who killed Adonis’ father Apollo Creed in the ring three decades earlier.

Creed was the Rocky spin-off that blew the world away like nobody expected, and this franchise continues its winning streak with an emotional and exciting sequel. Michael B. Jordan can deliver one hell of a punch, both in the sport but also with the emotion he brings to Adonis, trying to isolate himself from his father’s legacy but getting lost in the fight to preserve his own. This is Jordan’s defining character in his career at the moment, as he adds so much humanity to the role from his love for his fiancee to his relationship with his mentor Rocky. Jordan delivers the determination but also the love and pain of the character with energy and you’ll always be rooting for him. As for the rest of the cast, Rocky has been played with such iconic force by Sylvester Stallone for so many years that it’s hard to imagine these movies without him. He’s a great father figure to Creed but it’s hard to forget the times when he was the leading man of the saga because he still carries the films like he is. Tessa Thompson has been everywhere this past year — from Marvel to films like Annihilation and Sorry to Bother You — and deservedly so. Her character Bianca is not just there to support Creed but also helps guide his emotional journey through the film and pursues dreams of her own by singing, though her character deals with a hearing impairment. Bianca is a memorable character because she’s got a strong voice as well and often helps Creed pick himself up.

What I loved in this sequel is that everyone has a potent and believable emotional arc throughout the film. Even the “villains”, Ivan and Viktor Drago, are fighting rough because Ivan is determined to escape the shame he brought to his family when he lost to Rocky, by pushing his son very far to defeat Creed. The main character Adonis is also dealing with a lot, like starting a family while deciding whether or not he wants to be seen as “Apollo’s son” and if the fight to “rewrite history” is worth losing it all. Rocky also has his own journey, and not just when he’s guiding Adonis. He’s also mourning the loss of his wife Adrian and trying to reconnect with his estranged son and grandson, and become a family man again like the one Adonis is becoming throughout the film. The fight scenes are very engaging and the direction isn’t as memorable as Ryan Coogler’s who delivered sequences like the long-take fight in the first Creed movie, but he’ll still make you keep your eyes on the screen and embark on this journey with Michael B. Jordan’s titular character. There’s also an awesome training montage keeping the spirit of classic training sequences like from the older Rocky films. Even though the runtime flies by quite quick and it’s still got that boxing movie formula you know from the other films, Creed II is a passionate installment that stays true to the characters the first Creed movie made us love and will make audiences have a blast, sports fan or not. 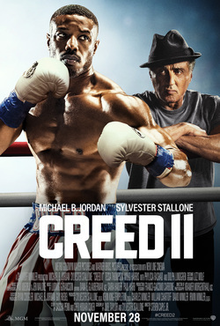