Theo is an ordinary garden snail. He works 24/7 at the garden and dreams of someday racing in the Indianapolis 500, like his idol, Guy Gagne. One day, he gets into a freak accident when he gets sucked up into the supercharger of a street race car, fusing his DNA with Nitrous Oxide. Theo now has super-speed and calls himself Turbo. He makes friends with some more snails, a taco driver named Tito, and Tito’s friends, and together they go to Indianapolis so Turbo can compete in the Indy 500 and live his dream.

This movie, distributed by Dreamworks Animation, is filled with laughs and a lot of heart. I also think the storyline was very well-written. All of the film’s character’s were very funny, even though the minions from Despicable Me 2 are 10 times funnier. The film’s amazing cast includes Ryan Reynolds, Paul Giamatti, Michael Pena, Luiz Guzman, Bill Hader, Michelle Rodriguez, Richard Jenkins, Ken Jeong, Maya Rudolph, Snoop Dogg, and Samuel L. Jackson. I would recommend this movie for kids 6 and up, because there are some things little kids might not understand. Overall the movie was funny and cute, but it was a little too short and is very predictable, too.

Here is the film’s site.

Duncan (Liam James), a 14-year-old boy, goes to a beach house for the summer with his mm, her boyfriend, Trent (Steve Carell), and Trent’s daughter. At a water park near the beach house, Duncan makes friends with Owen (Sam Rockwell) an employee at the water park, who changes his life. This movie also stars Toni Collette, Allison Janney, Anna Sophia Robb, Maya Rudolph, Amanda Peet, and Rob Corddry.

I saw this movie last week. I thought it was very funny. It had a great cast, especially Sam Rockwell, who was hilarious! Although the film was a little too short, it was good, but not great. This isn’t the best movie I’ve seen this month, but it wasn’t so bad, either. I would recommend this movie for people 13 and over and people who like coming-of-age movies.

Also, here is the film’s trailer. 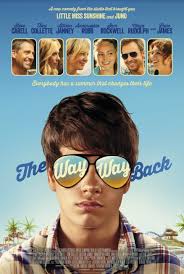 In the near future, giant creatures called the Kaiju (which is the Japanese word for monster) arrive on Earth via portal in the bottom of the Pacific ocean and attack Earth, taking millions of lives. To end this apocalypse, Stacker Pentecost (played by Idris Elba) creates the Jaeger (which is the German word for hunter) Program. Jaegars are huge robots who are piloted by two humans whose minds are connected. One of the Jaegers, Gipsy Danger, is piloted by Raleigh Becket (played by Charlie Hunnam) and his brother, Yancy. One day, Yancy is killed by a Kaiju, and Raleigh retires from being Gipsy Danger’s pilot. 5 years later, Raleigh is rerecruited by Pentecost to pilot Gipsy Danger along with Pentecost’s adopted daughter, Mako Mori, who’s family was killed by a Kaiju when she was a kid. Now it is  up to them to defeat the remaining Kaijus and destroy the portal.

I saw this movie recently with my grandfather. We both really enjoyed it. It was funny and had great visual effects. The 3D and acting were also great. Even though Guillermo del Toro’s movies aren’t the best, I have to admit that this one was really good. I would recommend this movie for anyone who loves science fiction movies.

Can you believe it? It is the 20th anniversary of the Spielberg classic Jurassic Park. To celebrate, Universal Pictures has rereleased it in 3D. I saw it recently and loved it! The 3D is incredible! The movie itself was great, too. The visual effects are amazing! The actors are good, too. The film is about 2 paleontologists who are invited to Jurassic Park by its founder, John Hammond. They are joined by a mathmetician and Hammond’s 2 grandchildren. Together they go on a tour of the park until the T-Rex escapes and things go wrong. I think that the whole family will enjoy this movie. You can own Jurassic Park on Blu-Ray 3D today!

Also, here is the site. 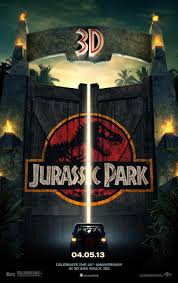