In recognition of the 9/11 attacks 14 years ago, I decided to watch Paul Greengrass’ 2006 drama United 93 for the first time yesterday. Because of the occasion, I will review it, too.

United 93 depicts what happened on United Airlines Flight 93, hijacked on September 11, 2001, but the only one out of the four planes hijacked that day to not reach its target. It is an incredibly realistic and moving dramatization of the events the film depicts. Not much happens within the first 45 minutes, but after that, it becomes very intense. There isn’t a specified protagonist, and no known actors, but the performances feel amazingly realistic, without doubt. Once the hijacking begins, everything become so intense, real, and in the end, heartbreaking. Thanks to director Paul Greengrass, I felt like I was watching an actual event. He directs the film masterfully, and like he does with Captain Phillips, he is able to convey the story on flight 93 and the narrative of the attacks. It ends very dramatically, and takes your breath away at the last moment of the film.

Overall, United 93 is an excellent, captivating movie that feels realistic and emotional, and that I would recommend for ages 15 and up.

This review is dedicated to all the passengers who lost their lives on September 11, 2001. 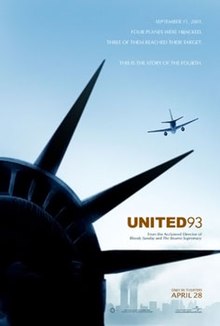