Café Society, Woody Allen’s new period comedy-drama, focuses on young Bobby Dorfman (Jesse Eisenberg), who moves from Manhattan to 1930’s Hollywood, starts working for his uncle Phil (Steve Carell), and falls for his secretary Vonnie (Kristen Stewart). This leads to a series of twists and an adventure filled with romance and crime.

Earlier this week, I saw an early screening of Woody Allen’s latest feature, Cafe Society, which Allen also wrote, and even narrated himself. Woody Allen is one of the many fantastic faces behind the cameras and screens of Hollywood. Despite how much effort and ambition he puts into every one of his films, not many of them have been recognized as well worth remembering, with the exceptions of Midnight in Paris and Blue Jasmine. Is Cafe Society able to hold up to what Allen can really do? From a directing standpoint, mostly. Allen does a fantastic job bringing the ’30’s back to life with the vivid sets, costume design, and striking cinematography, all of which pay homage to the way films in the ’30’s were shot and made. Although the Coen brothers’ Hail, Caesar! from earlier this year did a much better job bringing the old days of Hollywood back to life and making me feel like I was watching a film from decades ago (and with a smaller budget than Cafe Society), Allen still tries his best to bring both the old Hollywood scenery to life, as well as the late night party terrain of New York. Allen always cares a lot about his characters, which really shows here. The cast gives it their best, with Jesse Eisenberg playing another one of those “young characters in a big world”, and once again, Kristen Stewart plays Eisenberg’s love interest. We’ve seen these two actors onscreen together many times before, but there’s always something new with their characters that we haven’t seen before. Eisenberg is quite hilarious in this film and he carries the film along very well. Steve Carell is also a standout here, with some great lines and a personality that he delivers very well. Another thing that the movie handles very well is its humor. Every instance of comedy was written superbly and made me crack up. Also, if you don’t know who the movie’s narrator is, save that surprise for after you watch the movie, if you don’t happen to recognize whose voice it is during the film.

The place where the movie really struggles and does not hold up at all is the story. The movie starts out as an entertaining dramedy set in the ’30s, which quickly turns into a romantic film. I only started to have a problem with this later, when every twist is revealed too quickly and the dramatic irony is sacrificed. Following this is just a bunch of scenes that take the film nowhere, although there is a subplot in the film that managed to work. Fortunately, the movie’s humor is consistent and never dropped, but the movie’s plot became so aimless and got to a point when it felt uncomfortable to watch, and soaked away almost everything else that made it entertaining. I never understand where the film was aiming and why. Not every movie has a message, but every movie goes a certain direction for a reason. Allen’s films usually end by either trying to teach you something, or by showing how the characters have changed throughout the film. There was absolutely none of that in this film. When I got out of the film, I was still wondering, “What was this movie trying to teach me? How did the characters change throughout the movie and how did the film’s events even affect them?” The film’s ending was probably when Allen gave up on the screenplay and decided to give the movie and abrupt ending instead of a more thoughtful one. I can imagine how much better this movie would have been of Allen wasn’t trying to leave his comfort zone with the writing. The scenery, cast and humor are all spot-on and help bring this movie a lively surrounding and feel, but the story ultimately plummets and didn’t feel like Allen put in his best work. If you’re a fan of Woody Allen’s movies, then you may want to see Cafe Society, but otherwise, I wouldn’t strongly recommend this film. 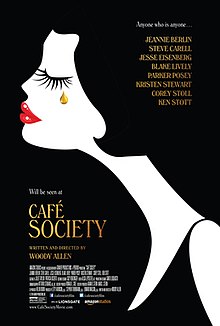