After successfully landing U.S. Airway Flight 1549 on the Hudson River, saving all 155 lives on board, captain Chesley “Sully” Sullenberger is deemed a hero by the news and everyone around him, but soon, a new investigation forces Sully to put his job, family, and reputation on the line.

The 2016 Oscar season continues to soar with Clint Eastwood’s Sully, based on the famous and heroic Hudson River landing January 15, 2009. Tom Hanks is no less than I expected from him as the heroic pilot and protagonist of the film. Don’t expect that single show-stealing scenes you get from most Oscar-hopeful/nominated performances, but Hanks becomes Sully throughout the film and watching him in this movie was nothing like watching an actor recite lines in front of a camera. One of the reasons Hanks is my favorite actor currently working in Hollywood is that he never needs to “overact” in order to deliver a great performance. He exaggerates his the way the script tells him to feel, instead you are able to understand his emotions with the smallest expressions from Hanks. Aaron Eckhart also delivers an impressive performance as Sully’s co-pilot Jeff Skiles, delivering a great personality and some humor as well. This movie is also very prestigious from a technical standpoint. The editing is marvelous and the cinematography is quite remarkable, especially in the plane-landing sequence that had me on the very edge of my seat, even though we all know the outcome. Eastwood directs and constructs the sequence to make the audience feel as if they are on the flight and really experiencing the scene, without needing to use loud sound effects and excessive use of cuts. The rest of the scenes are also directed so well that for a while, it’s even hard to believe that it all actually happened. Whenever a scene ends triumphantly, most films will have people cheering and clapping to indicate that something great has happened. Instead, the way Sully would bring you a scene like this is by having you listen to the exchange of dialogue, and ending the scene afterwards. Sully never exaggerates but is still so powerful with storytelling and emotion. This movie is not only a celebration of the miraculous event that occurred on the Hudson 7 years ago, but a celebration of human nature and how selfless and great us humans can be.

Tensely shot, incredibly acted, and magnificently directed, Sully is easily one of the greatest films this year, with Tom Hanks marvelously portraying a heroic pilot that the film proudly honors, and Eastwood directing a true story to its true potential. Don’t have anything else to do? Go watch Sully. 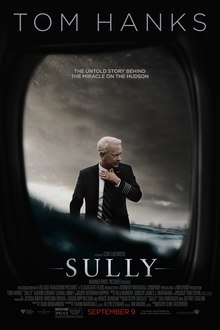 One thought on “Sully”