After a lighthouse keeper and his wife living off the coast of Western Australia rescue a baby from an adrift rowboat, they must decide whether to keep her and raise her as their own or report her to the police. Derek Cianfrance has brought us something truly beautiful with The Light Between Oceans, a poignant, tear-jerking, well-acted piece of film that will impact you emotionally like no other movie this year. Michael Fassbender and Alicia Vikander are astonishing in the film’s lead roles. Fassbender conveys every little emotion his character feels without having to use words. I don’t know if his performance here can beat what he gave us in last year’s Steve Jobs, but this film is undoubtedly another great example of how incapable Fassbender is of delivering anything less than great. Vikander fabulously helps carry the film and delivers what is by far the greatest performance of the year. It was hard to imagine her out of character for a moment because of how impeccably and marvelously she portrayed her role. She brings so much emotional strength that it even becomes disturbing in a few scenes. I haven’t seen too many performances like her’s in recent years. Rachel Weisz is also emotionally exquisite in her strong supporting performance.

The Light Between Oceans doesn’t only bring the best out of its A-list actors. The cinematography is dazzling and the score from Alexandre Desplat is easily the best this year. Every shot in the film is captured so gorgeously and perfectly, and it’s all accompanied very well to Desplat’s marvelous soundtrack. The movie tries very hard to get you emotional and depressed, and thankfully it doesn’t miss. Some scenes in this film managed to break my heart and almost made me shed a few tears. There are parts that are very tough to watch, so I’d only recommend this film for teens and older, but every one of these scenes are boasted by the cast’s strong performances and nearly flawless directing. I’m so impressed by how Cianfrance was able to put all of this to film and capture it so powerfully. All of this is what ultimately makes The Light Between Oceans a modern cinematic achievement.

The Light Between Oceans is gorgeously shot, acted, and directed, and is easily one of the best and most depressing films I’ve seen in theaters this year. It slows down a tad in the final act, but there’s no doubt to say this is the first true Oscar contender of the year. I can’t understand what critics find to be so mediocre about this movie, and I’d highly recommend you go see it if you’re 14 or older. 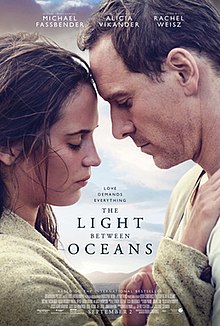 2 thoughts on “The Light Between Oceans”