Denzel Washington directs this adaptation of a Tony award-winning play in which he and Viola Davis once starred in, and here they return in their roles as a working-class African-American father and his wife, who try to raise their family in the 1950’s. Here they deliver two of the year’s best performances with terrific chemistry and dialogue. Washington plays a complex character with a difficult past and a lot he must deal with in the present, who at first seems like a typical nice family man who cares about those close to him, but he’s also intimidating when he wants to be. Delivering such a strong performance like this can be especially hard when you’re on both sides of the camera, but he’s able to convey this character’s personality and wide range of emotions very well. As for Viola Davis, she hasn’t been this good in anything since The Help. She gives it he absolute best here in every sense, and capturing the on-screen feeling of her character, who’s different than the typical housewife you’ll see in this type of films, is a task she’s definitely fit for handling. Despite the performances, there isn’t much about Fences that everyone is guaranteed to love. Sitting through this film requires more patience than most dialogue-heavy movies, and not because it’s 140 minutes long, but because of the extended scenes that span from 15-20 minutes, with a limited amount of characters and are heavy with dialogue and information. While many audiences may enjoy this style, others may not exactly enjoy sitting through the film. I enjoyed watching Fences on the most part due to its powerful themes and especially the performances, but its not one of the films that is guaranteed to keep everyone interested throughout the movie’s runtime. Watching Fences feels more like experiencing a play than a movie, so how much you’ll like it depends greatly on your taste. Some will definitely be captivated by nearly every moment in the film, and some may not enjoy it as much. It’s worth watching for the acting and the intense rush of feelings that you’ll experience in every scene. The emotions that are brought in and conveyed in each scene of the movie were unpredictable and there were lots of moments where mere dialogue exchanges felt heart-pumping because of this. The script deals with the characters and their relationships very well, building up the feelings and feeding us information about the characters throughout every minute in the film, until there becomes a bit too much for the screenplay to need to handle. The small setting in which the entire film takes place makes the larger picture of where and when the movie takes place feel underdeveloped, but the way the actors bring the characters and how they interact with the setting definitely makes up for this.

Fences isn’t a must-watch for everyone due to its theater style of scenery and storytelling, but it brings some superb writing and terrific performances to the screen that you can be sure the Academy won’t ignore. 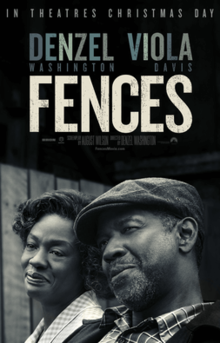 One thought on “Fences”