Moonlight follows a young black man and his journey from childhood to adulthood, as he struggles to find his place in the world while growing up in a rough neighborhood of Miami.

Moonlight is one of the few coming-of-age movies I’ve watched that actually leave a lasting impression on you after you see them. Most movies made about a character growing up or entering a new phase of their lives are meant to entertain and leave a smile on your face when the credits roll, but after watching Moonlight, I was affected. This movie takes a look at those who grow up during extremely tough circumstances, like how our protagonist, Chiron, is growing up in a poor neighborhood surrounded by bad role models and unfriendly classmates. We watch how a character experiences a not-so-perfect childhood and how that affects him later on in his life as well. Most coming-of-age movies are so great because they have lots of heart, but films like Boyhood, Good Will Hunting, and this, are meant to hit you hard emotionally. This movie definitely doesn’t fail. Director Barry Jenkins crafts great characters and a setting that we get to know as Chiron experiences important parts of growing up and tries to discover who he is meant to be in this world. Chiron is portrayed wonderfully by 3 different actors, and they all deliver almost life-like performances that are often emotionally tough to watch. Mahershala Ali is incredible as one of the most compelling supporting characters in the film. His character seems cliche at first, but after his first scene, he’s given lots of emotion and heart, and Ali did a terrific job embracing his role and bringing the best out of his acting. He’s come a long way from starring in Hunger Games movies and a Marvel TV series, and this is the performance that is sure to finally shine the light on him. Naomie Harris is also powerful and heartbreaking as Chiron’s mother, whose scenes are limited but very poignant.

Moonlight tells a coming-of-age story not in the inspiring way, but in the moving way. Although it may seem too similar to Boyhood, there are difference and filmmaking techniques and plot points that make the two films vastly different. Moonlight focuses on only three different chapters of the protagonist’s life with three different actors, and focuses more on hardships and influences of group up in rough circumstances, providing different themes and messages throughout its runtime. The writing and cinematography are always on-point and never boring, and the score is well-done and very nice to listen to. I could tell how dedicated the director was on telling such a difficult story that seemed so important to him, and he made lots of great choices while making this film. Moonlight may seem a tad familiar from marketing, but experiencing it is different from watching any other film. Well-acted, directed, and written, Moonlight is a powerful and moving tale of self-discovery. Not many films today are produced and made like Moonlight, so this film’s creativity and brilliance are guaranteed to score this film lots of nods at the Oscars. 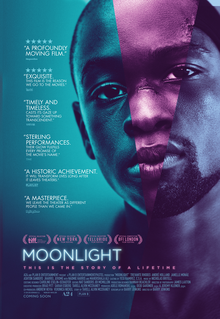 One thought on “Moonlight”