In this animated comedy, Emma Stone plays the lead role, Eep, who is part of the world’s first prehistoric family, the Croods. Her family stays inside their cave for most of the time. All the neighbor families were killed by prehistoric animals, but only they have survived because of Eep’s dad, Grug (Nicholas Cage). His one rule is “Never not be afraid”. One night, Eep sneaks out of the cave and meets Guy (Ryan Reynolds), a prehistoric genius with ideas like fire and shoes who has a pet sloth named Belt. He warns Eep that the world is coming to an end, and gives her a shell, which he tells her to call him with if she survives.

The next day, an earthquake (which is actually the beginning of what is now known as the continental drift) destroys the Croods’ cave and everything familiar is gone. Soon Guy joins the Croods on their journey to a mountain, so they can “ride the sun” to a paradise land Guy calls Tomorrow.

The Croods is a beautiful, humorous movie filled with laughter, beautiful landscapes, and amazing visuals. It reminds me of Hotel Transylvania (another one of my favorite animated movies) because in both movies there was a very overprotective father who didn’t understand what his daughter really wants. I think The Croods is the #1 family movie of the year so far. CBS Radio News calls it “an animated Avatar”. I recommend this movie for people of all ages, whether you’re a child, adult, or senior! This movie is rated PG for “some scary action”.

Below is a picture of me sitting next to Belt and Douglas, a mutation of a crocodile and a puppy who soon becomes Thunk’s pet. Above me are the Croods and Guy (I don’t know why, but in the picture, I am hiding one of my hands!). 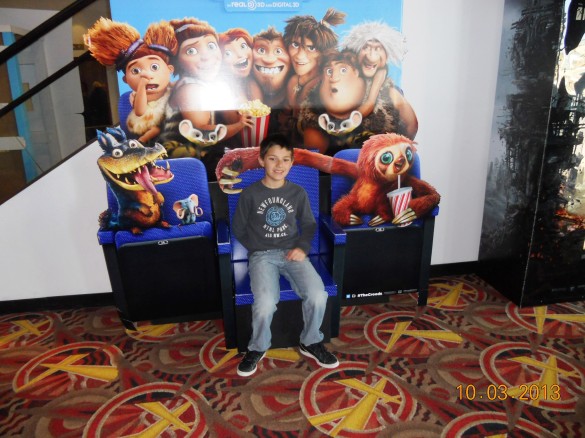 2 thoughts on “The Croods”