Growing up can be a bumpy road, and it’s no exception for 11-year-old Riley, whose family must relocate to San Francisco. Like all of us, Riley is guided by her emotions – Joy, Fear, Anger, Disgust, and Sadness. The emotions live in Headquarters, the control center inside Riley’s mind, where they help advise her through everyday life. As Riley and her emotions struggle to adjust to a new life in San Francisco, the emotions conflict on how best to navigate a new city, house and school.

Just like every Pixar movie, Inside Out is a very original treat that both children and adults would enjoy. Its depiction of the brain and what happens inside it is brilliant, and it all ties up with scientific accuracy. The animation is beautiful, from depicting real-life issues to situations in the brain. The cast are all stunning, especially a joyful Amy Poehler as the lead (the only positive emotion of the five), a perfectly casted furious Lewis Black, and a sweet, tearful Phyllis Smith. All the stars are able to carry the movie along in such an excellent way, I never wanted to turn my eyes off their characters. Inside Out is less of a fantasy or science fiction movie than most recent animated movies, and I love how realistic the writers made this movie. Director Pete Docter definitely put in a lot of hard work into this movie, and it sure does pay off (considering that he took inspiration from the movie from his preteen daughter’s behavior, and that he also directed Monsters, Inc. and Up) Unlike Pixar’s last three films, Inside Out is more of a mature drama than a family comedy. I am very glad Pixar is aiming this direction once again, and that by next year, it will be as successful as it was 10 years ago.

Overall, Inside Out is brilliant, hilarious, touching, and definitely brings Pixar back in its game – bringing Joy to us all. 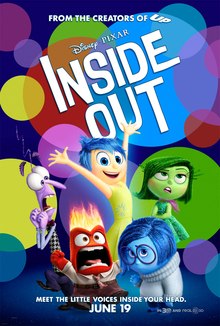