A reimagining of Disney’s cherished family film, Pete’s Dragon is the adventure of an orphaned boy named Pete and his best friend Elliott, who just so happens to be a dragon.

Disney is continuing their surprising streak of great live-action remakes with Pete’s Dragon, which is based on the 1977 live-action classic, instead this time, the dragon is given a visual update with CGI instead of being hand-drawn. And once again, Disney succeeds at bringing a charming, family-friendly world of CGI to life. Although there isn’t as much visual weight and realism to the dragon as there was to the incredibly photo-realistic environment and characters in this year’s Jungle Book, there’s enough charm and fun to make it another solid and spirited Disney family flick. The is a splendid cast that helps carry the film that includes Bryce Dallas Howard, Wes Bentley, Karl Urban, and Robert Redford. Oakes Fegley, the child actor who plays Pete, does a remarkable job acting in front of his costars and sometimes in front of nothing (in the scenes in which his character must interact with Elliot). The majority of the film, however, didn’t require as much interaction with computer-generated surroundings as the leading child actors from The Jungle Book and The BFG, hence making Fegley’s performance less impressive and unique as the other actors and overall, I felt much more connected to the leads from the other two films. The standout of the cast is definitely Howard, who brings lots of life and energy to her character and delivers a notable performance from the film.

This movie may be a great time for families and especially younger kids, but that’s really the only target audience for the film. If you watch this film looking for a great story, you might not be satisfied. The story has lots of soul, but the film’s second half starts to slow down a little bit before entering familiar territory and following a formula used by too many family films.The story of a kid trying to protect an extraordinary being while the adults’ greed and fear prevents them from understanding the situation as well as the protagonist has already been used plenty of times. E.T. and How to Train Your Dragon are just a few examples of films that follow the exact same formula during most of their runtime. When the movie tried to get exciting during the final act, it was hard for me to care because of how cliched it mostly was. However, the film concludes with a great message about family and preserving your surroundings.

Although it does get too familiar at times, I can bet you Pete’s Dragon will be a great time if you go see it with your family, with lots of soul and great underlying messages, as well as outstanding cast members and writing. I wouldn’t recommend this if you’re looking for the best movie out there, but if you want to see a fun and touching family film, then Pete’s Dragon is unlikely to disappoint you. 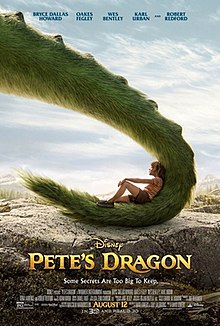