Hotel Transylvania is a hilarious, animated film starring Adam Sandler, Selena Gomez, Andy Samberg, Kevin James and Fran Drescher. In this film, Dracula (voiced by Adam Sandler) owns a resort named Hotel Transylvania, where monsters and their families can rest in peace, away from the danger of humans. On one special weekend, Dracula invites the world’s most famous monsters, including Frankenstein’s monster (voiced by Kevin James), his bride (voiced by Fran Drescher), a family of werewolves (the parents, Wayne and Wanda, are voiced by Steve Buscemi and Molly Shannon), Murray the Mummy (voiced by Cee Lo Green), Griffin the Invisible Man (voiced by David Spade), Bigfoot, the Blob, and many other famous monsters to celebrate his daughter, Mavis(voiced by Selena Gomez)’s 118th birthday. But an ordinary 21-year-old human traveler named Jonathan (voiced by Andy Samberg) accidentally enters the hotel and falls in love with Mavis.

I really enjoyed this film and I thought it was hilarious. I would recommend this movie for children of all ages. Even adults will enjoy this movie. My brother and my dad also really enjoyed it. It is now one of my favorite animated movies of all time!

Also, here is the website and the trailer of the movie. 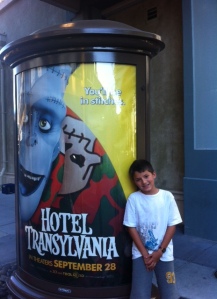 One thought on “Hotel Transylvania”