Like the book, the film tells the story of a young hobbit named Bilbo Baggins (Martin Freeman) who is hired by a wizard named Gandalf the Grey (Ian McKellen) to accompany 13 dwarves on a quest to reclaim their home, the Lonely Mountain, from a dragon named Smaug.

My friend, my dad and I all enjoyed this movie, even though it was really long (it’s almost 3 hours long!). I liked many things about this movie, including the action, the humor, the music, the cast and the costume design. I heard it was already nominated at least 2 Oscars, including Best Makeup and Hairstyling and Best Visual Effects!

Also, here is the website and the trailer of this movie.

The photo below is a picture of my friend (who saw the movie with me) and I next to a picture of Bilbo Baggins holding up a sword. 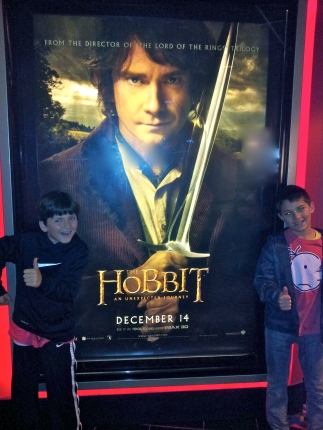 7 thoughts on “The Hobbit: An Unexpected Journey”