After Air Force One is shot down by terrorists in Finland in an attempt to kill the President of the United States (Samuel L. Jackson), the President (who survived the crash) teams up with a 13-year-old Finnish hunter (Onni Tommila) to take down the terrorists who are trying to hunt the President.

Lately this summer, most movies I’ve watched were very disappointing, and were either bad or decent at the most. However, Big Game is a movie that I enjoyed at moderate level. I actually had very low expectations for this movie. The marketing and trailers made the film look incredibly awful and cliche. It is, without question, a very cliche movie, but that doesn’t mean it can’t be more than a boring, predictable action flick. The action actually happens to be pretty fun, and even though it isn’t anything we haven’t seen before, it does have an entertaining factor. The action is well done, and not as predictable as most recent films of its type. It has some fun comic-book styled violence, and feels a lot like a 80’s or 90’s action-adventure movie. The performances from Samuel L. Jackson and young Finnish actor Onni Tommila are both good. Their characteristics are convincing, with Samuel L. Jackson conveying an interesting point about being the president, and Tomilla acting as a relatable character my age.

The story is constructed well, despite the fact that the movie is extremely short, especially for an action movie (it’s only an hour and a half long). There is one point at the end that remains a loose end and isn’t quite clear. Some of the dialogue doesn’t work, and some sound extremly familiar, being previously used in action movies of its type. The movie does use one-liners, but they mostly work. The movie also has a limited humorous factor, which works as well. Like I said before, many plot points turn out to be cliche and familiar, but the movie is still entertaining and not completely predictable.

Overall, Big Game is a very fun movie with great action and good performances, but not much more. If you simply want to have fun at the movies, then this movie is a good recommendation. 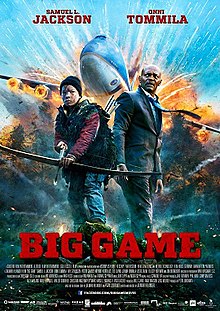