Florence Foster Jenkins tells the true story of a New York heiress who dreamed of becoming an opera singer, and never lost confidence within herself, despite having a terrible singing voice.

Florence Foster Jenkins is a delightful, charming, and very watchable film. It delivers an interesting yet poignant true story that was able to entertain and touch me throughout. Meryl Streep does not fail to carry the film excellently as the titular role. She not only delivered the charm and heart of the character, but she was able to completely transform into her role, as I was only able to see the character, and not Streep. She’s able to carry the film so well with her character’s confidence and emotion. Her character entertains but also touches, and throughout the film you often feel very sorry for her. I think it’s safe to say that Streep has earned herself another Oscar nomination for another fantastic performance. The story that’s told through this film is nothing close to an important historical lesson like most films based on true stories, but it’s an interesting biography that’s made entertaining and interesting. There’s some great humor throughout, and all of the cast does their best. The sets and costumes are all vivid and done beautifully. But what makes the story here so well told is the controversy behind the film’s titular character. Many criticised her voice and others praised it, but her husband alway encouraged her and made sure she’d always feel acknowledged. What’s so interesting is to know that all of this actually happened, and the story here really made me think. The movie feels very light-hearted and uplifting most of the time, it’s also poignant deep inside, which is what makes this film very effective at delivering its topic with great heart and emotion, as well as an empowering cast and great prestige.

Florence Foster Jenkins will not disappoint those who anticipate it, with great execution as well as a wonderful performance from Streep as the lead. It’s entertaining but also very heartfelt, and if you enjoy these kinds of movies, you should definitely go check this one out when it’s released in August. 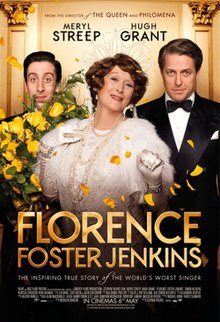